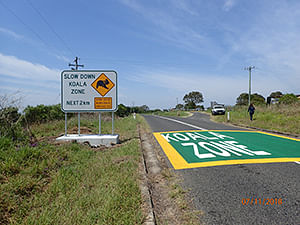 Council’s Environmental Strategies team engaged Sandpiper Ecological to analyse the best available data on wildlife roadstrike in the Lismore LGA and come up with come up recommendations for how to mitigate roadstrike in priority areas.

Council is seeking external funds and working Transport NSW to implement some of recommendations on the highest priority roads.

In January 2019 Council installed the first koala zones on Wyrallah and Tuckarimba Roads. This has resulted in speed decreases along these roads. Anecdotal reports have also seen an increase in driver vigilance with people’s increased awareness due to zones signage resulting in misses of koalas and echidnas along Wyrallah Road within the zone.  The effectiveness of the zone in decreasing koala roadstrike will be measured by comparing the next 5 years of data with the previous years.

A copy of the report is available here